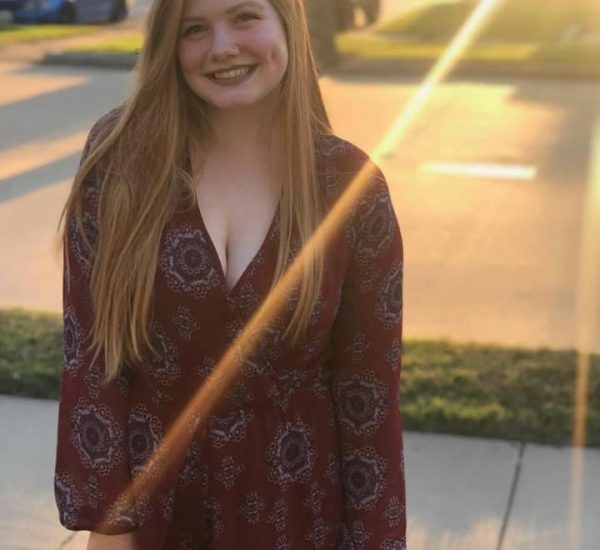 Harris Drake is a senior who thrives in the spotlight, both literally and figuratively. She is described by her friends as brilliant, captivating, passionate, fabulous, independent, an Aries, and above all a true bean, ask her she’ll get what it means.
This quote from her tells you all you need to know about who she is as a person. “Most people just need someone to listen to them without judgment.” She is involved in numerous groups such as, Alpha Chi, Phi Beta Kappa, Alpha Psi Omega, Sigma Tau Delta, and the Order of Omega. She is also modest to the point where she would tell me not to brag about her this much, but the work she has done is worth sharing. She was featured at the Austin College Scholarship Conference presenting a script that she has been working on since fall semester last year starting with individual character development. Her work in Stop Kiss last spring, Haunting of Hill House, and Silent Sky all were points of inspiration for her original play The Girl with One Eye.
In my time knowing Harri, she has been a constant source of inspiration for myself and other budding actors and freshmen. Becoming her close friend is bittersweet since I know she graduates in 2 months, but I wouldn’t trade that time for anything. I can truly say that I have grown to love her as one of my closest friends. She has helped break me out of my shell and let me know that it’s ok to believe that you are great at what you do. Harris Drake is a showstopping and powerful woman and I believe the world deserves to know that.