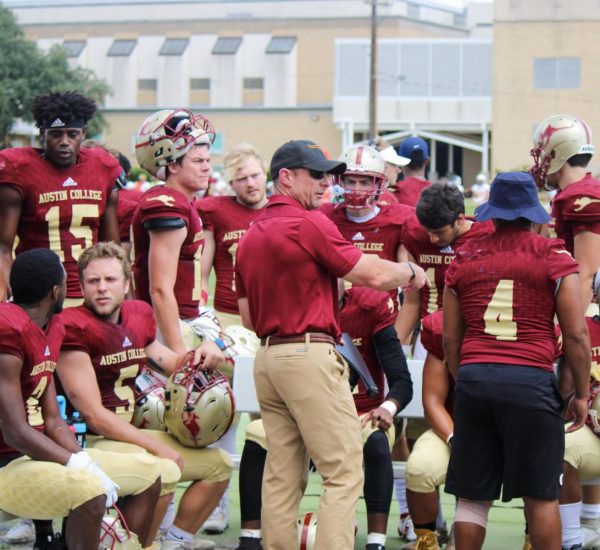 On Saturday, Sept. 21, Austin College football team came out on top against Centre. Centre College was ranked No. 19. In the beginning, AC had a swift lead 13-0. It was close at halftime with a score of 13-10. By the end of the game, Roos pushed seven additional points while Centre only added three points. The final score was 20-13. Austin College is 2-1 overall and 1-0 in the Southern Athletic Association play. The next home game is Oct. 12 at 1 pm against Millsaps College.
Cheerleaders helped entertain the fans in the bleachers. The Austin College Pep Band and the Aussies dance team also made an appearance at the game. The Pep Band kept spirits high with playing throughout the game including during halftime. The Aussies performed during halftime as well, dancing, jumping and kicking their hearts out.
The game was significant for senior Colt Collins. Not only did he throw two touchdowns on Sat., but he was also named the Southern Athletic Association Offensive Player of the Week. On top of that, he broke the school’s record for most yards of total offense in a career. (www.acroos.com: Collins Named SAA Offensive Player 0f the Week)