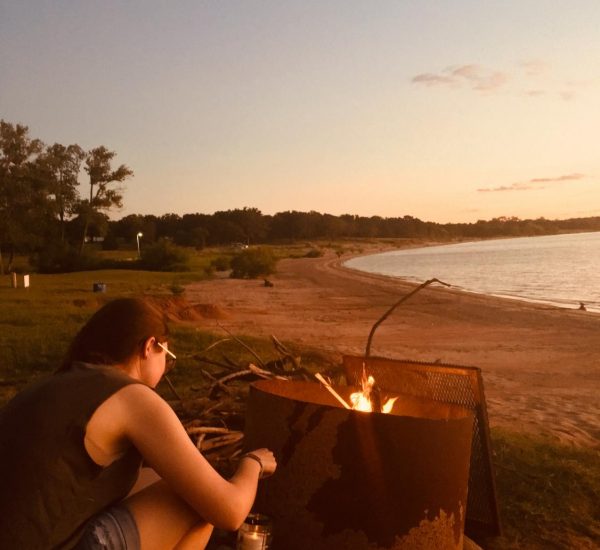 There’s something primal and satisfying about fire – in the way that it softly glowed into the night sky, grasped at and curled around our marshmallows, crackled jovially as we accidentally dropped food into its flames.
Maybe that’s what made this Philosophy Club event so soothing and intimate. There are not too many events that can claim to evoke introspection and uncensored warmed from people, but Philosophy Club succeeded with their Bonfire Night, Friday, September 28th. Tori LeRoy, Philosophy Club’s current president describes the event as “Wonderful! There was swimming, guitar playing, frog catching, and conversations about everything from neuroscience to plant consciousness… It was a lot like the bonfires during Philosophy Club’s prime and I’m glad we could bring back the tradition!”


As much as it upheld its legacy, the Bonfire was silly at times too – I admit to trying to set a potato on fire, and a few unnamed individuals also experienced struggle in their fight to properly roast food – but it was wholesome. The lake waters were cool, the sand was soft, and the mosquitoes were mostly ignorable. It was physical, visceral, vivid in a way we forget when we’re often spending hours cooped up, studying for our never-ending list of tests and quizzes. It all came together to make a great evening with friends.
I’m going to be honest, I don’t go to many school events. I’m busy – just like any other student – with work, school, and everything else we sign ourselves up to for reasons including passion, necessity and resume building. But if there’s anything to take from the bonfire night, it’s the importance of occasionally letting our masks go. Of letting go of the roles we play and letting ourselves sink into the undefined, unencumbered underbelly of who we really are. Maybe it was the way that we couldn’t really see each other’s faces, the way we’d only grasp at glimpses of faces and so, focused on seeing the unseeable parts of people, but it was refreshing in a way not too many things are.
It was an experience I hope others have the joy to partake in, too.

A warm thank you to Philosophy club for hosting a wonderful evening and letting me write about it. If you want more honest, intellectual, conversation, check out Philosophy Club, 6pm on Tuesdays in the WCC!