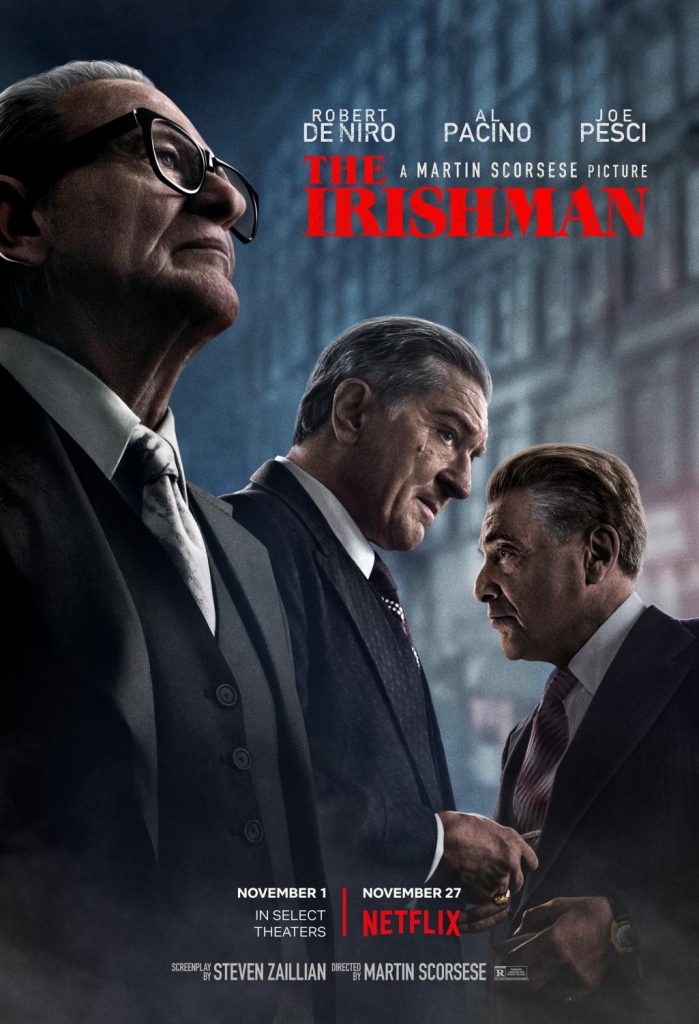 Oh, Martin Scorsese. What a fruitful and wonderful career you’ve had. Scorsese has made some of the greatest and most influential films of all time, including Taxi Driver, Raging Bull, The Last Temptation of Christ, Goodfellas, and many more. And unlike his peers Steven Spielberg, George Lucas, Brian De Palma and Francis Ford Coppola, he’s still going strong, creating modern classics over four decades later. Who could ever forget recent gems like The Wolf of Wall Street or Silence? His newest film, The Irishman, will also go down as one of his best. It’s likely the last gangster film he will ever make, and is his ninth film starring long time collaborator Robert De Niro. The cast also includes mobster alumni Al Pacino, Harvey Keitel, and even Joe Pesci, coming out of his unofficial retirement for this one gig. This movie is definitely an event for longtime Scorsese fans, but thankfully it’s has plenty to offer outside of nostalgia. The Irishman is a deeply profound film that could have only been made towards the end of Scorsese’s career. It’s a subtle, dryly funny, and often heartbreaking coda to his long run of crime dramas.
Based on Frank Sheeran’s true life story, the film is about a labor union official, with some predictably shady ties to both Jimmy Hoffa and the mafia. The movie takes us backdoors to what really went on at the International Brotherhood of Teamsters, and all of the various crimes they committed in secret. Even the film’s alternative title, I Heard You Paint Houses, is a reference to their double entendre for murder. It even goes as far to explain some real world events, including John F. Kennedy’s potentially rigged victory, and Hoffa’s quote-unquote disappearance. We’ll never know if it’s the truth, but it makes a convincing case. It’s all very interesting, and the film does a good job presenting its world to newcomers unfamiliar with these topics.
In many ways The Irishman is the anti-Goodfellas, because crime here is not fun or cool. According to this film, a life of crime is a wasted life, and one that robs us of what really matters. Henry Hill may have loved his wiseguy lifestyle, but Sheeran would take it all back if he could. I wonder if this is on some level Scorsese’s final word on the gangster genre, which is certainly something he helped pioneer and glamourize. Because there is nothing glamourous about Frank Sheeran’s life. He lives in constant regret, as he’s always selling out his family and friends for his work. By the end, he’s dying all alone, with nobody who cares left alive. Sheeran is one of Scorsese’s more morally conscious protagonists, and the film donates much of its time to his self reflection. It actually has quite a bit in common with his last movie, the religious persecution epic Silence. They’re both films about people trying to find moral solace in violent and horrifying situations. The final half hour is especially haunting, as Sheeran faces all of his consequences at once. Out of all of Scorsese’s crime films, this one feels the closest to his heart.
As one would hope, the acting is phenomenal throughout. De Niro and Pacino have both starred in a lot of terrible movies lately, so it’s really satisfying to finally see something worthy of their talents. De Niro is very sympathetic as Sheeran, and this is easily up there with The Godfather Part II and Once Upon a Time in America as one of his best mobster roles. Pacino is shockingly hilarious as Jimmy Hoffa, in a performance that’s hammy but never feels out of place. And it’s just great finally seeing Joe Pesci in something again, and in a way we’ve never seen him before. We’re all familiar with the ranting maniacs he played in Goodfellas and Home Alone, but this role is much calmer and intimidating in a different sense. It’s difficult to pull off this type of engaging subtlety, but he did it.
And of course, old Marty still knows his way behind a camera. The cinematography and music is captivating throughout, and Thelma Schoonmaker once again proves herself as one of the greatest editors of all time. One controversial element is the usage of de-aging CGI for De Niro and Pesci, and while at times it looks like a PS4 game, more often than not it’s pretty seamless. Another divisive factor is the runtime, which at 3 1/2 hours makes this Scorsese’s longest narrative film, with only a few documentaries topping it. And while I can see the length annoying some people, I was never phased by it. In fact I’d argue the movie feels about forty five minutes shorter than it actually is. And even though the film is long, it’s never slow. Something exciting is always happening, just at a leisurely and natural pace. I respect that the film isn’t rapid fire action like Goodfellas, because that would have been disingenuous to the characters and tone at hand. Instead, The Irishman is a mature and authentic late-period film from one of the greatest filmmakers in history. It’s unlikely he’ll get a closing credits project as great and fitting as this, so don’t miss it.
The Irishman will be streaming on Netflix starting November 27th.