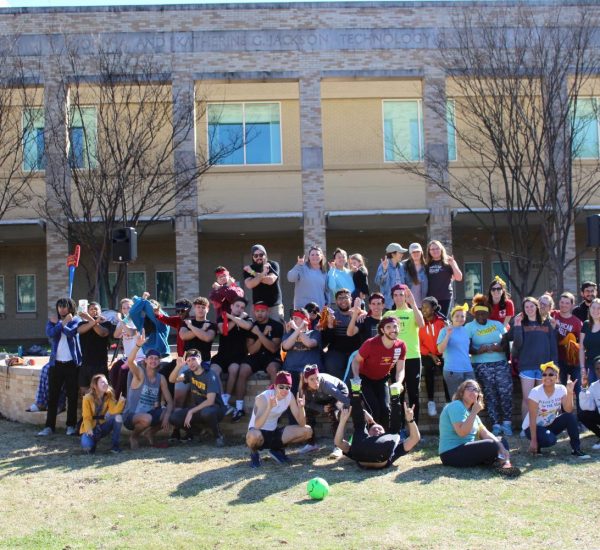 If you passed by the College Green on Saturday, February 8th you might have seen the First Annual Battle of the Halls going down. This event organized by Area Coordinator, Jimmy Wilkins, was revived this year.
Teams from Baker, Clyce, Dean, and the Brockett Complex competed. There were various athletic events that the teams competed in finished off with a trivia competition. In addition to bragging rights, the winners were awarded the highly sought over Battle of the Halls trophy.


The first event was the Tic Tac Toe relay. The teams were challenged to complete the tic tac toe board(nine hula hoops) as fast as they could. Each team was given a different set of colored whiffle balls and had to throw them into the hoops. Just like in the classic game, the winner was the first team to get three in a row. The honor of this victory was handed to the Brockett Complex.
Next up was the Minute to Win It Relay. There were three steps to this relay, the first person had to spin around fifteen times and then run to tag their teammate who then had to shake ping pong balls out of an empty tissue box(as a spectator I found this part hilarious). The last leg of the relay was a two-legged relay. Clyce Hall won this event.
Up next was the classic game of Tug o’ War! After several rounds and plenty of slipping and sliding, Baker Hall was declared the victor! The event after that was the Time Hop. Teams were challenged to hop from one hula hoop to the next. They then had to run from one end of the field to the other hula hooping the entire time. Baker won this competition!
The last outdoor event was Rock, Paper, Hop. Players from each team hopped through hula hoops and when they met in the middle they played rock, paper, scissors. The winner got to continue, while the loser had to go back to the beginning. This event was the most fun for me to watch. It was action-packed and emotions were running high. At the end of this event Brockett and Baker each had one team member, it was close but eventually, Baker pulled ahead and won.

The events moved inside after this for pizza and Austin College Trivia. After the Brockett Complex Team was announced the victors of the Trivia Competition all the points were added up. In fifth place with 12 points was Caruth Hall. Dean Hall came in fourth with 27 points. Third Place went to Clyce with 29 points. First place was a close one with Baker coming at 49 points and Brockett with 46.

Despite all the competition everyone was a good sport and cheered each other on. There were several moments of silliness and a dance party even broke out! I can say without a doubt that this year’s Battle of the Halls was a success. I can’t wait to see what next year has in store!