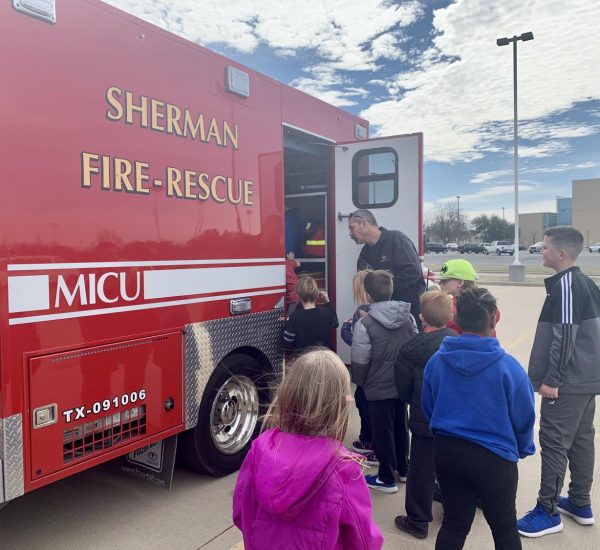 This Saturday a few dozen students gathered in the Wright Campus Center at Austin College to learn about fire and personal safety from Sherman firefighters and police officers. Volunteers from Service Station, Alpha Phi Omega, Alpha Delta Chi, and various other groups came out to help wrangle and watch over the kindergarten through fifth grade kids.
The first stop was the parking lot next to the tennis courts where a fire truck and ambulance were waiting for the kids to arrive. All 24 kids walked through the ambulance and firetruck and then broke up into groups to learn more about each truck and ask questions about their jobs.

In the ambulance the kids sat around the stretcher while the technician explained what he does for his job, saying that he responds to emergencies and takes injured people to the hospital. The kids seemed bored and distracted during his talk, but when he asked for questions, every little hand shot up! They pointed to practically everything in the ambulance wondering what it was. Even the scissors, which the technician informed that they are for cutting clothes off of the patients in order to more easily get to a wound underneath. Kids and their curiosity!

The technician then eagerly showed them the vomit bag which got a resounding “ewwww” and the needles which received a visible shudder from all the kids. Then he held up an IV bag and asked if anyone knew what it was. Only one hand stood up and he explained that he had seen it on his mom. On a bit of a happier note, the technician then held up a blood pressure cuff and asked what it was for, to which a little girl replied “it hugs your arm!”
The kids began to get antsy so they switched over to see the firetruck. They walked around the truck while the firefighter pointed out all of the interesting features. The kids got to try on a real fire helmet and it was so heavy that some of the kindergarteners struggled to stay standing! Again, the kids were incredibly curious about each little thing on the truck. One of the second graders asked what the big nozzles on the side of the vehicle were for and the firefighter replied that they were simple for sicking up water and letting it out of the tank. Another child even asked what the long shiny handle by the passenger side door was. The firefighter chuckled and said it was just a handle.
Finally it was time for a quick lunch break in the Austin College cafeteria where the kids got to try the burgers, pizza, hotdogs, fries, and best of all (for the kids, not the volunteers) the ice cream! By the time lunch was over, they were jittery from the sugar and ready to spring into action.

Luckily, the day wasn’t over yet! They were taken out to Zauk circle where a police car and several officers were waiting. Austin College Police Chief Kelle Kennemer talked to the kids about how the police department’s job is to keep their community safe. They make sure that bad people do not get on campus or in the neighborhood and that if there is bad weather they ensure that the campus is safe and secure. She finished by informing the children that the police station is right in the middle of Sherman before opening it up for questions.
And they sure did have some interesting questions for Chief Kennemer. Of course, the first question asked was if she likes donuts, to which she replied “of course, who doesn’t like donuts?” with a laugh. Someone asked if she had ever been tased. She said that she never had but gestured to Officer Rhodes asking if he wanted to tell his story, but he shook his head ardently. One of the more interesting questions posed was “how long is the sky?” to which she good-heartedly responded that it is eternal.

After the kids asked questions they got to sit in the back of the police car which is a hard plastic seat, as it is easy to clean blood of other bodily fluids off of, and played around with the measuring wheel. Chief Kennemer then pointed out all Officer Rhodes gear to the children including the gun, handcuffs (which caused even more gasping than the gun), and bullet proof vest. She said that the vest weighs about eight pounds and that officers usually carry 28 to 32 pounds of gear on their belts every day.
When gesturing to the bullet proof vest, Kennemer patted Rhodes on the stomach saying “we have handcuffs and –” where she paused hoping one of the kids would fill in the blank. But instead of saying a bullet proof vest like she had hoped, one little boy shouted, “a big stomach!” which earned a great laugh from both the officers and the volunteers.
To bring Roo Bound to a close, the kids headed back to the Wright Campus Center. They got to decorate paper bags with markers and stickers to create their own safety kits. Each kid filled their bag with a compass, a flashlight, and a whistle, the latter of which the children absolutely loved, but the volunteers, and surely the parents, hated.
All in all, Roo Bound was a success! The kids got the chance to interact with Sherman safety workers and left Austin College with knowledge of how to stay safe and keep others safe in their communities.