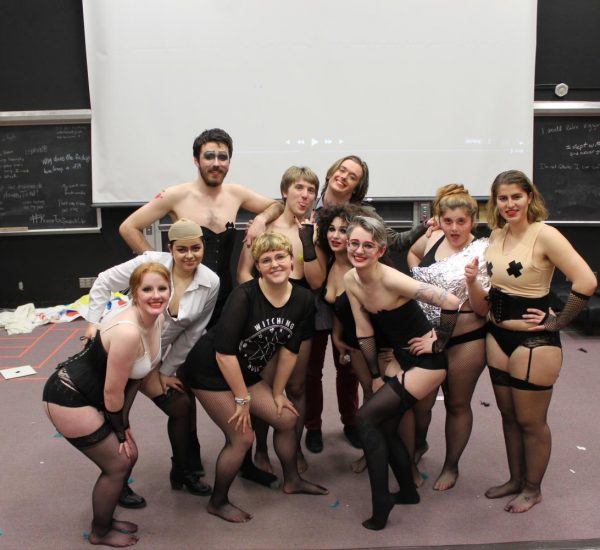 Alpha Psi Omega and CAB did something truly incredible this past weekend. The Rocky Horror Picture Show will surely be one of the best events of this semester. We introduced loads of students to the greatest cult film of all time, and we raised over a thousand dollars for Outlast Youth, a wonderful organization dedicated to fighting LGBTQ+ youth homelessness. The CEO even came to the show! For more information go to OutlastYouth.org.
So what exactly is The Rocky Horror Picture Show? That’s a fair question, as most people in the audience had no idea what they were getting into. Rocky is, in one word, nuts. It has consistently played in midnight screenings for over forty years, making it the longest theatrical release of all time. Although it was a critical and commercial disaster at first, it quickly found an audience in the LGBTQ+ community and sci-fi/horror film freaks. The picture is a glam rock musical, equal parts parody and homage to old B-movies, and a sex-postive celebration of gay and genderqueer lifestyles. With its kitschy aesthetic, catchy tunes and unforgettable performances, the movie is still a glorious cinematic fever dream. And even if you don’t like the film on its own, the experience of seeing it in a theater is something everyone should try. Rocky Horror has evolved into a one of a kind multimedia performance, with “shadow casts” across the globe acting out the movie as it happens, and with the audience dancing and shouting out dirty jokes. This undying fanfare is what solidifies Rocky Horror as truly one of the greatest films of all time. There’s truly nothing else like it.

Our resident, Rocky Horror expert, Kat Forbus should be thanked for bringing the debauchery to Austin College. They put their heart and soul into this project, directing and organizing everything in under a month. The entire cast did a great job, including Harper Jambor as Dr. Frank-N-Furter, Chandler Lee as Brad Majors, Brittany McMillen as Janet Weiss, Kiersten Esposito as Riff Raff, Logan Taylor as Magenta, Chloe Schnaible as Columbia, Kyle Andrle as Rocky, Sawyer Ahmad as Eddie and Dr. Scott, and Your’s Truly as the Criminologist. Kat and I also provided X-rated Mystery Science Theater 3000 style riffs, which gave some of the funniest moments. Kat’s roast towards Dr. Tom Blake in particular was priceless. The entire audience was also encouraged to participate, as they threw props at the actors and danced the Time Warp.
For more nearby Rocky Horror screenings, look into Los Bastardos and Amber Does Dallas. And if you enjoyed Rocky, I highly recommend you seek out these flicks: Phantom of the Paradise, Little Shop of Horrors, Pink Floyd’s The Wall, Hedwig and the Angry Inch, Evil Dead 2, Donnie Darko, The Room, Cats, and pretty much anything on 366WeirdMovies.com.