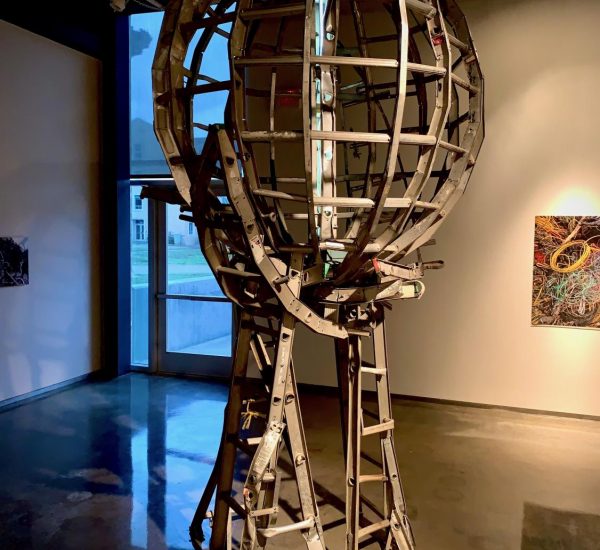 As the campus moves into a more secluded approach to quarantine, students may find themselves looking for a way to pass the time and follow social distancing protocols. One of the options for  art-minded students is the exhibit currently in the Betsy Dennis Forster Art Studio Complex.
The exhibit was built by Professor Mike Monroe, the teacher for sculpture and ceramics. Monroe built the pieces during his sabbatical and channels what he has named “Industrial Debitage: Artefacts of the Anthropocene.”
“Debitage usually refers to the leftover flint scrapings that are found where prehistoric humans made flint tools,” said  Monroe. He then further explained that the debitage left by humans of millennia ago is similar to that of modern humanity’s propensity for landfills and scrapyards.

Monroe stated that he came up with the idea while he had injured his arm, after he took the many pictures that wreath the walls of the exhibit. In the many frames around the room, you can see metal rhyming with nature as there are pictures of scrapyards and creek beds that invoke a similar appearance.
“Artefacts of the Anthropocene,” refers to the modern period (The Anthropocene) and further ties the ideas that hold the exhibit together. While we often see history as strictly in the past, this exhibit reminds us that history is right now as well.
While the scale and usefulness of discarded material has changed in the time between the prehistoric man and today’s college student, the fact that even the trash that is thrown away may someday be an archeological artefact is an interesting quandary to face.

Personally, the sculpture titled “Obelisk With Indescribable Inscription,” interested me as the pairing of ancient architecture and modern materials in a fascinating juxtaposition. If you would like to visit the Betsy Dennis Forster Art Studio Complex and the exhibit there within, you must do so quickly, as the exhibit closes soon.