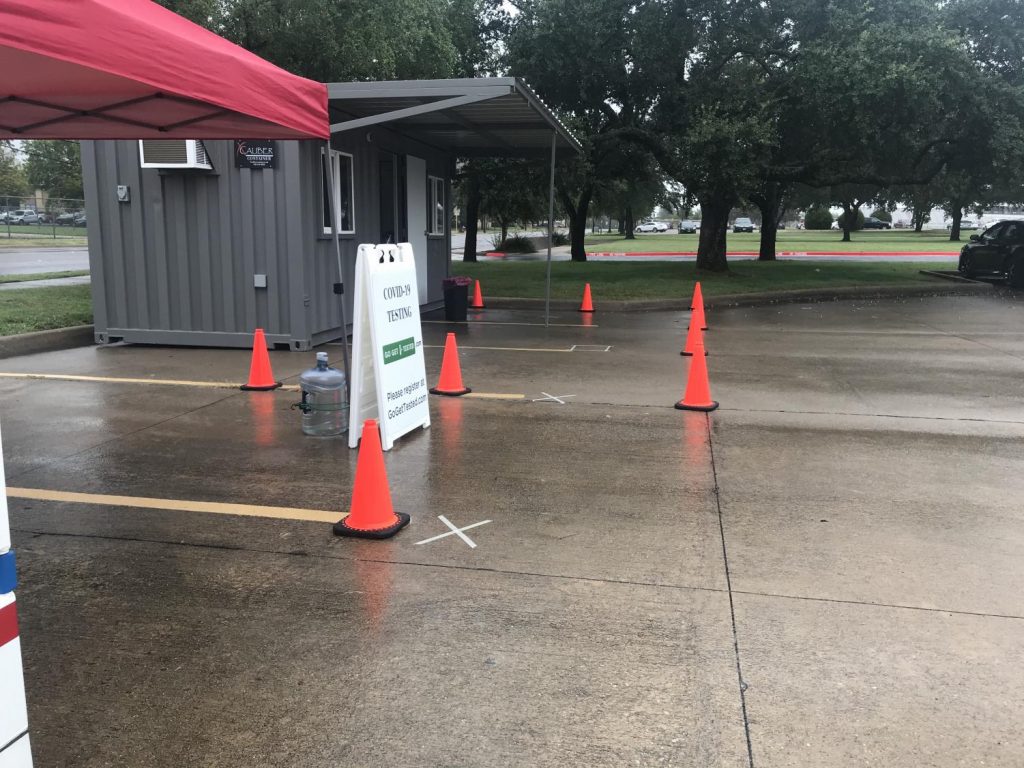 On September 11th, 2020, the Austin College community received notification that Wellhealth, an independent agency that provides primary care and other health services, would be working with the school to set up station and conduct free on-campus testing for COVID-19. The announcement, sent out via email, said that testing would be mandatory for all residential students, approved commuters, and all employees – leaving many with some questions that sought answers.
Shortly after the news surfaced, testing began on September 15th, 2020.
The site is administering a noninvasive, PCR oral swab. According to the FDA (United States Food and Drug Administration), the PCR test, oral or nasopharyngeal, is the most accurate to date.
Clara Harper, a sophomore and Resident Assistant for Clyce Hall, received the nasopharyngeal swab in early August. In sharing her experience, Clara stated that her nose “burned for an hour afterwards.” She said that the oral swab was much more comfortable and that she’d prefer it over the nasal swab any day. New studies via the University of Utah Health, Harvard Health, and many more have concurred that the oral swab is just as effective as the nasal swab. The oral swab simply offers the patient more comfort.
Organized schedules were created and sent out to the student body, by way of email, to notify everyone of when their designated test day and time were. The schedule was split up by residential facility and times were determined based on floors.
Michael Deen, Dean of Students, shared that as of the September 28, 2020, Wellhealth has not given school leadership a point in time in which they will be closing the testing site. Meaning, that once all residential facilities have met the mandatory testing requirements, the testing site will be open for anyone living on or near campus to come to get tested and/or re-tested. There has also been discussion of Wellhealth using Austin College as a location to offer a vaccination for COVID once one has been developed.
With the testing site remaining open, until further notice, conversation surrounding recurring mandatory testing has surfaced. When asked about this, Michael Deen said that there has been discussion about potentially performing random testing, and these plans will be announced once they have been finalized.
After being tested, results are sent out via text message or email. If a student tests negative, they are free to resume in campus activities. However, if a student tests positive, Austin College Health Services is notified, and support is offered to the student as they begin their quarantine period.
Students living in residence halls are transported to an on-campus isolation space where meals are delivered to them three times a day. Whereas, students in apartment-style living are permitted to isolate in their bedroom inside the apartment. Health Services, then, conducts contact tracing for any close contacts – who are advised to quarantine as well.
Additionally, Health Services determines when a student, who has tested positive, can return to campus life. Typically, the student can return 10 days after a positive test, and 14 days after being identified as a contact. However, a negative COVID test is not required.
There have been many studies, some including one from the Vermont Department of Health, another from the National Centre for Infectious Diseases – Academy of Medicine Singapore, showing that those who test positive can still positive up to 3 months after they have had COVID. This is commonly called a persistent positive. These positives may be due to molecular remnants of the virus, but the science isn’t exact yet. It is also undetermined if an individual is still contagious during that 2-3 month period.
Dr. Saritha Bangara explained that  persistent positive is a rare occurrence, but the school’s plan for managing any persistent positives is to repeat the initial isolation process. However, out of the 1200 students and employees that have been tested – the school has not seen any cases in which a second positive from one individual has occurred.
Bangara also  said, “both the World Health Organization and the Centers for Disease Control and Prevention estimate that people can be considered recovered and non-infectious 10 days after their symptoms began, as long as they have been symptom-free for three days. That means if symptoms went away on day 6, the individual could be considered cured after day 10. If symptoms persist, though, for 12 days, they would need to tack another three days onto their period of isolation.”
Austin College’s decision not to require testing to return for the Fall 2020 semester was based on many different factors. The main factors, communicated by Dr. Lynn Womble, being that there was a lack of reliable, affordable, and timely testing capacity in this region of the country in August. This meant that required COVID-19 testing was simply not feasible prior to the Fall Term 2020. However, in September, PCR testing became available for Austin College to offer, free of charge.
Womble stated that “we seized on that opportunity and were able to deploy a testing site on our campus within a very few days.”
As the school works hard to keep the campus open throughout the remaining duration of the Fall semester, remember to stay safe, socially distance, and properly sanitize. We’re in this together, ‘Roos!
For any additional information, or any updates, regarding Coronavirus at Austin College please visit the following link: Monitoring the Coronavirus.