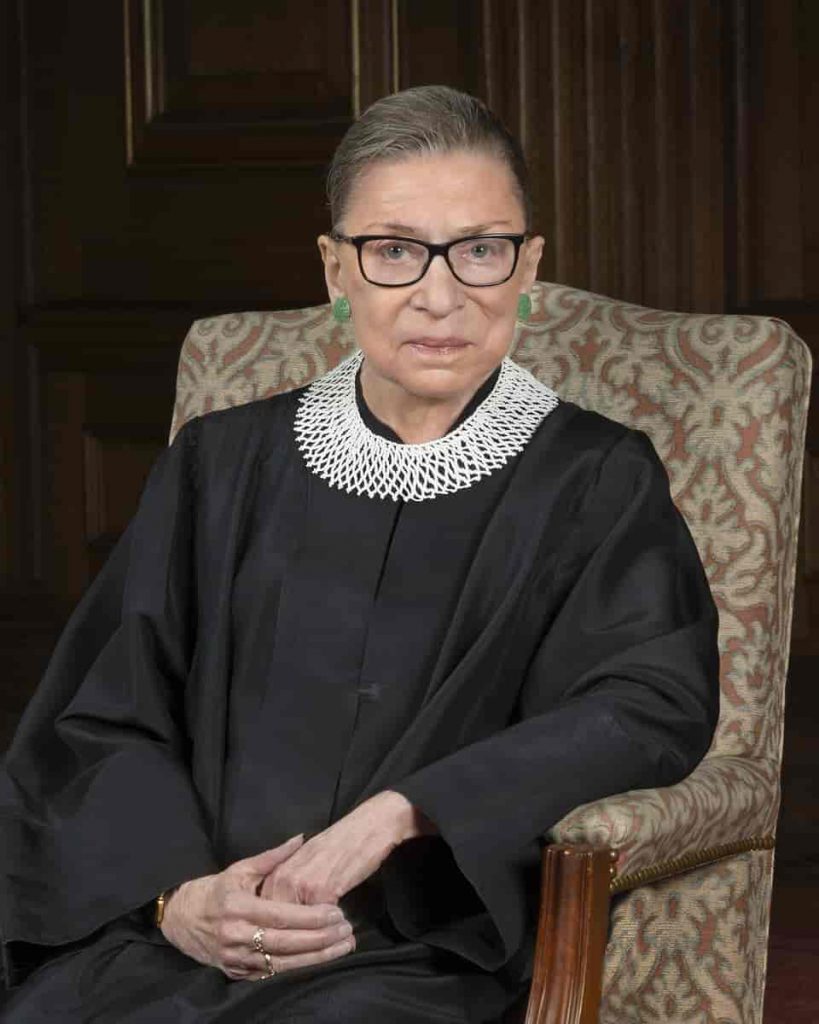 On Friday, September 18th, Supreme Court Justice Ruth Bader Ginsberg passed away at the age of 87. Ginsberg was born in 1933 in Brooklyn, New York and in 1954, graduated from Cornell University and in the same year, married her husband, Martin Ginsberg. Two years later, RBG went back to school, this time to study law at Harvard, where she was one out of nine female students. Not only did she break barriers by being the first woman to serve on the Harvard Law Review, she did so while caring for her daughter and her husband, who suffered from cancer. After he recovered, she transferred to Columbia University and graduated as one of two valedictorians.
Despite her extreme qualifications, she found it hard to get a job in the law field due to her gender and the unfairly restricted options for women in the US at the time. This led her to advocate for gender equality and presented several cases in front of the Supreme Court in order to bring about “gender-blind justice,” or the idea that men and women were equal in the eyes of the law. The Supreme Court almost always ruled in her favor. Ginsberg was nominated to the US Court of Appeals in 1980 by former President Jimmy Carter and later nominated to the Supreme Court in 1993 by Bill Clinton, joining Sandra Day O’Connor as the second woman to serve on the highest court, as well as the first Jewish woman. She was 60 years old at the time, but nowhere close to retirement.
Some of the most notable Supreme Court case victories Justice Ginsberg ruled in favor of include United States v. Virginia, which allowed women to attend the Virginia Military Institute; Olmstead v. L.C., which gave people with mental health issues the right to partake in community-based programs (with the approval of doctors); and Obergefell v. Hodges, the historic decision that legalized marriage between same-sex couples in all 50 states of the US. Even when she famously said, “I dissent” (instead of “I respectfully dissent,” the traditional utterance), she was still able to affect policies. For example, despite being in the minority in Ledbetter v. Goodyear Tire & Rubber Co., her argument in support of equal pay for equal work led President Obama to sign the Lilly Ledbetter Fair Pay Act in 2009, which forbade employers from discriminating against their employees based on age, race, religion, gender, national origin, or disability. Just this past June, in the middle of Pride Month, Ginsberg and five other Justices ruled in Altitude Express v. Zarda that in addition to those other six factors, employers can no longer discriminate based on sexual orientation or gender identity.
The loss of Justice Ruth Bader Ginsberg is a tragedy felt by people across the country and across the globe. Her loss is perhaps felt most deeply by civil rights advocates, feminists, LGBTQ+ activists, and others pushing for equality. However, there hasn’t been much time to mourn her death, as the Republican-controlled Senate has already vowed to vote on her replacement less than two months before the 2020 election, in sharp contrast to their decision four years ago to “let the people decide” following the death of Justice Scalia in February 2016, which in comparison was nine months before the 2016 election. In fact, polls show that the majority of Americans want whoever wins the election to fill the vacant seat, upholding the precedent set by Republicans just four years prior.
Ruth Bader Ginsberg was a  fearless fighter for equal rights in the name of the law, lover of her job as a judge, and a three-time cancer survivor. She sadly passed away after battling it for a fourth time, but she never gave up in the weeks before her death. Despite only being five feet tall, she is considered by many to be a “giant” and a “titan of the law.” She benefited the lives of thousands of people over her 87 years, especially the 27 spent serving on the Supreme Court. She will be greatly missed.
Rest in peace, RBG.