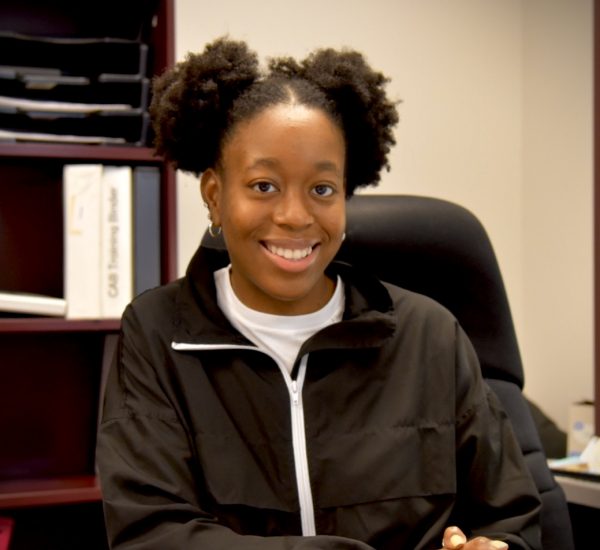 Sitting in her dimly lit space, hair in two buns, and face covered by her grey cloth mask, Amanda Handsbur, the new face of Students Activities administration, welcomes me in her peaceful office. The young woman from Houston freshly graduated from Texas State University is the new director of Students Activities at Austin College. At TSU she got her Master’s degree in Student Affairs and Higher Education while working as a graduate assistant in the Dean of Students where she participated in different activities ranging from conduct hearings to event planning and workshops.
Surprisingly, Amanda did not choose the education career right out of High School. “My major was Communication and I minored in Theology,” said Amanda when talking about her undergraduate studies at Texas Lutheran University (TLU), which she describes as small and community-oriented compared to Texas State University that has around 38,000 students. At first, she wanted to major in psychology but “that changed…fast,” she said. So she took some communication classes and enjoyed them. However, the triggering element of her change of professional field was not a preference for a particular class, but rather an active involvement in her campus’ organizations and activities.
Amanda occupied various positions at TLU such as peer mentor and vice-president of the Black Student Union (similar to Black Expressions). “I really liked giving back to students,” she said, “but I noticed there wasn’t much representation for me at TLU, on the administration level.” This absence of people of color at the administration level nourished her desire for change, not only of her career but also of colleges and universities. She emphasized the need for schools to be more diversified at the administration level, as more young people of color have access to higher education. Her goal is to become the dean of a small university. She might consider vice-president or president later, but for now, she says these are just ideas.
Her desire for giving back to students and increasing diversity around campus did not stop when she finished her studies though. When asked about her goals she did mention helping students organize their events, additionally, she plans to at least see the current freshmen graduate and to actively participate in making Austin College a more inclusive place than it is already. She plans to do this by helping to improve the use of words and language by the Austin College community, especially by faculty and staff who interact the most with students. Regarding change overall though, she acknowledges it cannot be done overnight and encourages students to understand that results might only show up later, and they have to be okay with it benefitting only those who follow.
Concerning her main struggle, not at Austin College, but overall, Amanda mentioned navigating her race, age, she is not yet 25, and gender in professional settings, especially when needing people to listen to her. This involves having to choose between being stern or getting talked over, for example. She admits that she has not yet figured out how to do that, but recommends getting to know oneself better to effectively decide how to express one’s opinion and fit one’s personality.
When asked what she would say to seniors and anyone who is planning to graduate soon, as she is a recent graduate herself, she advises not to be afraid of following a path different from what they thought they would because it might take them further than they can imagine. Her academic and career experiences prove it.
Amanda talks passionately about her life and  goals for Austin College. Overall, she is grateful to the Austin College community for being welcoming. If anyone is interested in her field or has any other questions about her or events, she is more excited to help and explain the whole process, “My door is opened for y’all,” she added.