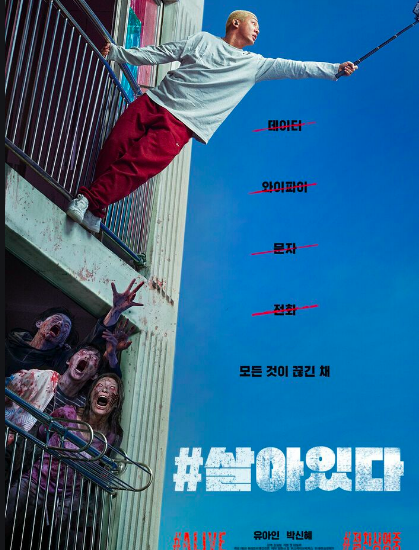 A 2020 horror film directed by Cho Il-hyung, #Alive is unique in that it is a zombie movie that only stars two primary actors: Yoo Ah-in and Park Shin-hye.
#Alive begins on a regular day in the city, opening with a young man playing on an impressive computer gaming setup. Oh Joon-woo stumbles to the kitchen to find a note left by his mother, saying she had gone out and asking Oh to purchase food. Within several hours of lazing around the house, screams develop from the streets, pulling Oh away from his lazy day as he cautiously peers over the balcony. Caution quickly turns to horror as Oh sees a daughter chewing off her mother’s arm.
Oh quickly takes to methods of communication: Calling his mother, messaging his gaming friends, and turning on the news. Oh realizes that he is in isolation as hours pass and no replies come in. Oh is yet again pulled from technology by banging on his door and subsequently has his first interaction with an infected man (who quickly turns into a zombie). Understanding the seriousness of the situation, Oh barricades his door and spends days, if not weeks in isolation. The film follows Oh’s mental deterioration and loss of hope as he attempts (through trial and error) to make contact with other human beings using his drone.
Movie reviewer Brian Costello notes that this aspect of the movie mirrors our current struggles with COVID-19 — living in isolation with a dying sense of community and morale. The film’s creators depict our struggle with our plague through a post-apocalyptic teen’s challenges with his own as he finds all ties to the outside world cut off.
Halfway through the film, Oh meets a woman living across the street in an apartment directly facing his own: Kim Yoo-bin. Oh is now able to find some semblance of human connection and renewed hope just as he decides to hang himself. Thus, the halfway marker of the film creates a new ambiance of light and courage as the two young adults fumble to communicate from across a street and eventually reach each other.
Just as much a story of loss as one of new beginnings, #Alive presents themes of resilience when on one’s own: A message we all need right about now. This South Korean zombie movie, like many that came before it, instills a sense of fear as well as one of bravery in its audience through only two embattled characters in a field of the undead.
Photo: #Alive 2020 official movie poster