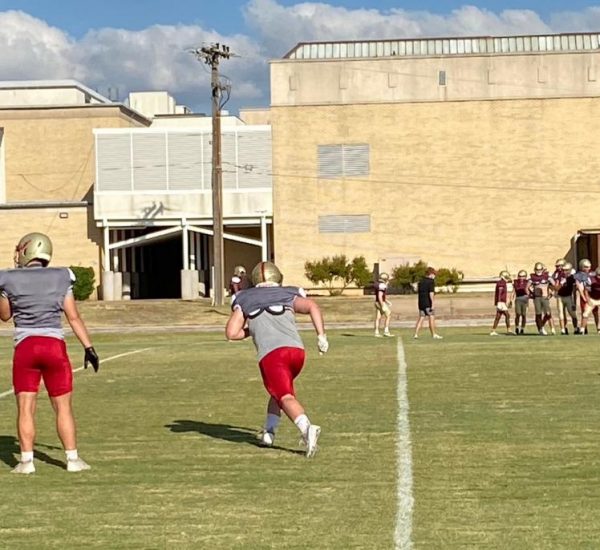 Fall football has always, and probably always will be, a staple in Texas and Texas culture. From tailgating, to cowbells, to screaming-until-you-lose-your-voice, college football has always been how one was supposed to spend their Saturday nights. But now that the fall season has been canceled, the boys are instead using this newfound free fall semester to practice and train hard for the upcoming season in the spring.
Practices began officially for them on September 23 with a multitude of regulations, such as constant mask-wearing and adequate social distancing. Practices have been different in terms of Covid-19 regulations, but according to Coach Ben Moran, the skills they focus on have been the same.
“What we do is the same,” Coach Moran said. “The drills, the plays, how we hit each other, how we run, everything skill related is the same. We found a way to maximize everything really well, and we’re at the point now we’re practicing the same way we would’ve during a normal fall.”
KJ Johnson, a sophomore, notes how the fervor of practice hasn’t changed either. “I love how practice has the same intensity even though it’s completely different from anything we’ve ever experienced before.”
Senior Broderick Hampton enjoys the energy the team has during every practice. “It’s a direct reflection of how hungry everyone was to get back in pads and go to work.”
“We also hold each other accountable and really act like a family,” freshman Kaiden West says. West also adds that he thinks as long as everyone gets to play football that they’ll be happy.
Just being able to practice wasn’t something many of the football boys were expecting to be able to do at all this semester, and many expressed their gratitude at just being able to play and have the season in the spring. Junior Tyler James says, “we were happy that they told us we were going to be able to at least practice so we could build-up for the spring season. We’re all just excited to play honestly.”
“It’s an opportunity and that’s all we can ask for,” Hampton said. “We’ve been working our tails off and I can’t wait to win with this team come springtime.”
“I can’t complain at all,” Johnson comments. “Going into this season I figured we wouldn’t even practice. Hearing that we get to play games in the spring was amazing.”
Head coach Loren Dawson thanks Coach Norman and the athletic trainers for all their hard work in making practice possible. “The easy thing to do would’ve been to say no to practice, but they worked really hard so that we could.”
The masks and other rules, of course, are difficult to get used to, but the guys are taking it in stride. “The masks have definitely made practices different, but we’re getting used to it, it’s helping us condition a whole lot more. It’s actually becoming more enjoyable because it means we get to finally be out here.” James said.
“Our guys are being very flexible with everything they have to do to be able to practice, and have done a great job in having positive attitudes.” Coach Dawson said.
Overall, the football team is still practicing hard in preparation for their season in the fall, despite the numerous setbacks they and other fall sports have been facing due to the pandemic.
“I think we’ve made the most of [everything going on].” Coach Moran said. “Our guys are healthy, they’re safe, and that’s great.”
“I miss football.” Coach Dawson said. “I haven’t missed coaching a fall season since 1989. But it’s very understandable with everything going on, and I’m very excited it’s being moved to the spring.”