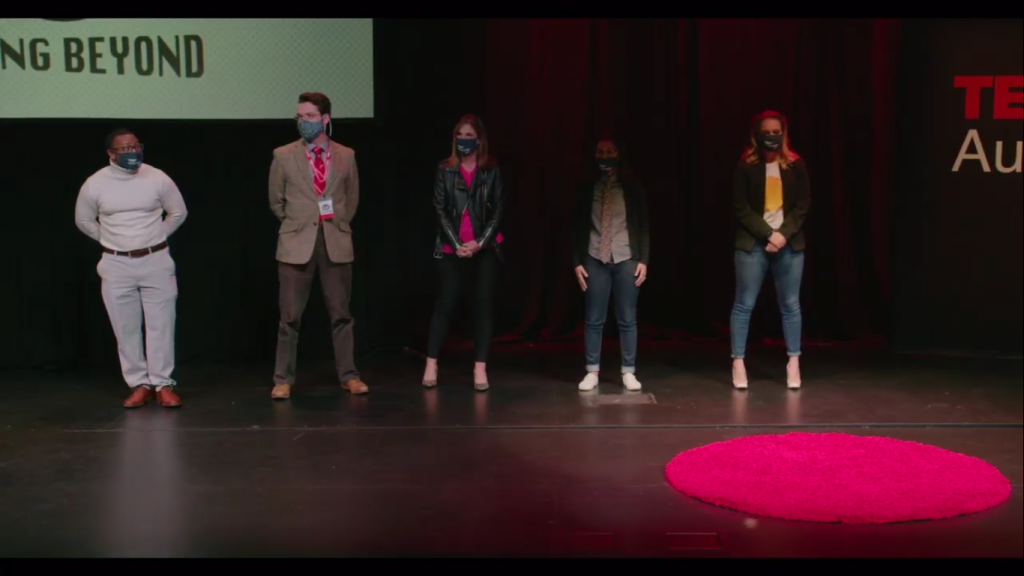 Despite the setbacks of the coronavirus pandemic, TEDx came to Austin College on October  3 and featured five nominated speakers. The in-person event was held in the new Sally and Jim Nation Theatre, and the TED organization allowed the program to be live-streamed for the first time.


The first speaker, Dr. David Whelan,  Associate Professor of Physics at Austin College, explains the size of the universe in his talk, “Our Lone Star: Understanding the Vastness of Space” and compares the sun to a basketball. His scale put the Solar System about two miles out from Ida Green Communication Center, with the nearest star four thousand miles away. Dr. Whelan ended on a hopeful note, urging others to continue the work on space travel to overcome the overwhelming size of the universe.

Betsy Walling Furler graduated from Austin College in 1989 and now works as the Founder and CEO of For All Abilities. Her talk “Our Differences Are our Superpowers: Thinking Beyond the ‘Dis’ in Disability” addresses the harmful stigma associated with disabilities. She uses herself and others she has worked with as examples of how disabilities such as ADHD and autism strengthen an individual. Her talk encouraged others to embrace their differences. See the feature sidebar in this issue for more about Furler.
Tim Crossley graduated from Austin College in 2020 and is currently finishing his Master of Arts in Teaching. He also teaches Texas History and coaches basketball, football, and track in Mesquite, Texas. His talk “Get Your Head in the Game: Let Fear Be Your Fuel” encourages others to use fear as a motivator. He pulled examples from his own life where he used his fear of failure to achieve his goals and did not let it hold him back.

Brittnay Connor graduated from Austin College in 2014 and now teaches in Dallas. In 202o, she was named the Dallas ISD Elementary Service-Above-Self Teacher of the Year. In “The Truth about ‘These Kids’ and ‘Those Teachers,'” she discusses the difficult circumstances she faces in her classroom. She talks about connecting with her students by opening up about her own experiences, and how empathy and understanding creates a more positive environment. She urges others at the end to step up and help teachers provide better opportunities for students.

Mack Bolen, the last speaker, and current senior, focuses on concussion and brain injury in her talk “Why Concussions Have Been Great for Sports.” She explains what happens to the brain after sustaining an injury and draws on her own experiences with traumatic brain injury from playing sports in high school. She argues that this research, which led to restrictions in contact sports, provides good prevention measures, and ensures safer games.

In-person, the event complied with CDC guidelines. All attendants were required to wear a mask and show a green health badge when checking in. Attendees were seated as they came in, and to ensure everyone was seated six feet apart, there were balloons tying some seats together so they could not be used. Each seat had a TEDx bag with a program, pen, mask, crayons, and coloring sheets. There were trivia questions asked during the intermission and correct answers were rewarded with T-shirts. Occasionally, the livestream would have issues, and the event would pause until everything was back online for remote viewers.