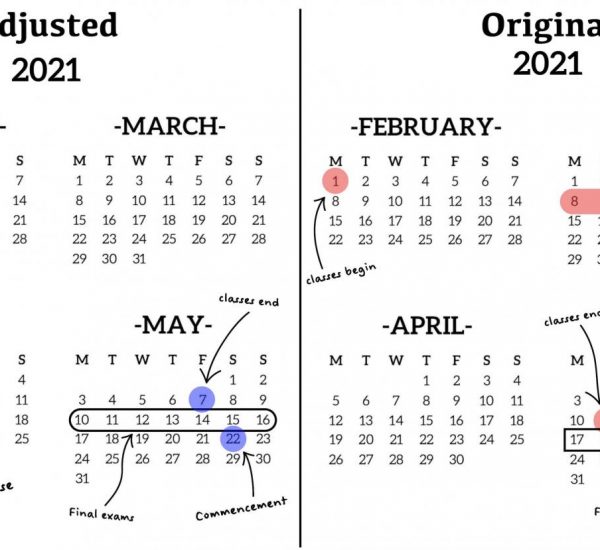 It would be difficult to deny that this year has had its ups and downs, and due to COVID-19, this semester has been different. Austin College has seen its fair share of changes including adapting to remote learning and using certain doors for only entering or exiting. As the virus persists, there are more changes in store. Last week an email was sent out to the student body regarding the Spring Term 2021 schedule which received a wide range of reactions. Here’s what you need to know:
Spring Break has been removed and replaced with ‘Spring Pause,’ a Friday free of classes in April.
Spring classes will start on Wednesday, February 3, and end on Friday, May 7.
All other key dates during Spring Term have been accommodated to fit the new schedule. For example, the last day to add or drop a course has been moved up and finals week is May 10 through May 14.
The most significant change, and the one that has caused the most disappointment among students, is the removal of Spring Break. The school year has been rough for students, faculty, and staff, and Spring Break was the light at the end of the tunnel.
At first glance, most students were understandably disappointed to have their Spring Break taken away from them amidst a year that has been so trying already. However, it is important to consider the reasoning behind this change. Dr. Beth Gill, Vice President for Academic Affairs and Dean of the Faculty at Austin College, was among those who made this decision. It was highly influenced by the constantly changing state of the pandemic and Gill said that “first and foremost [they] considered the safety and well-being of our campus community.” The team understands that this change will be difficult, but they are aiming to keep the campus healthy and safe.
Gill also offers some words of advice for the coming semester, “Although the removal of Spring Break is disappointing, and emotionally and mentally challenging, we all need to continue to be vigilant in our safety practices and protocols in order to reduce risk to ourselves, our campus community, and our society.” By removing Spring Break and replacing it with a three day weekend, the college hopes that this will encourage students to stay in Sherman, so as to not travel and potentially spread the virus or bring it back to campus.

It may appear that the college is not making up for the week students would have had off.  However, this has been taken into account by the school. On the graphic above, it can be seen that Spring Term starts on a Wednesday, two days later than originally planned, and ends on a Friday, four days earlier. Although this does not completely compensate for the week of Spring Break that was lost, it does take this into account and shows that the college is trying to compensate for this lost time.
Some have even taken to the AC app to discuss creating a petition to bring back Spring Break. If the petition materializes it will likely have no effect on next semester’s schedule, but it shows how bothered students have been in the one week since the change was announced.
Other students are extremely concerned with how people’s mental health has been affected this year and that Spring Pause will not work in favor of improving mental health. Melika Monfared ’21 has expressed that this has been her busiest and most stressful semester at Austin College. She has also noticed how difficult this semester has been for many of her friends and how it has been affecting their mental health. Without the normal week for Spring Break, Monfared is worried that the “semester is practically all work and no rest.”
Student Jeffrey Berk ’23 has similar opinions. With Spring Break being the only time off for students during second semester, this break was not only a time to catch up on coursework, but also as Berk says “a period of time I spend with family.” Although he understands that the college made this decision in hopes of keeping the spread of the virus under control, Berk is skeptical of its practicality. He thinks that because many students go home on regular weekends, that the removal of Spring Break will not help much in preventing the virus from entering the campus.

Other students, although initially disappointed about the removal of the break, are in favor of the change. Carlos Estrada ’23 would enjoy a week of break from classes, but says, “I would rather protect myself and stay away from the coronavirus.” Despite the fact that Estrada is appreciative of the college’s efforts to look out for students’ health and safety, he also thought that it would have been a good idea to move Spring Break to the last week of April. Several other students have suggested this idea, as it would allow students to have a week off, travel home, and go fully remote until the end of the semester.