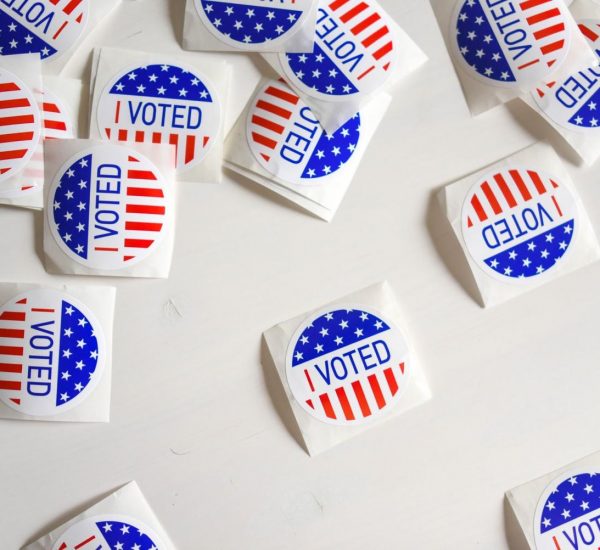 Oh, the return of the “I Voted” stickers!
One week before Election Day, Dr. Felix Harcourt and Dr. Nate Bigelow, faculty experts in U.S. history and politics, discussed hot topics surrounding the 2020 election, including Texas becoming a battleground state, voting during a pandemic, and why some experts worry the country might face a constitutional crisis. Last year, both professors spoke with students about the impeachment proceedings against President Donald Trump, a far distant event from current election concerns. Hunter Williams, STAT officer and former student body president, welcomed students and faculty and introduced both professors.
Dr. Harcourt opened the discussion by recounting the contentious elections of Jefferson in 1800, FDR in 1932, and Nixon in 1968 to remind listeners that the 2020 race between President Trump and former Vice President Biden is not the first to give potential for a constitutional crisis over a disputed election in the US, although this election is unusual in many ways. Certainly, this election marks the first time that an impeached president has run for reelection.

However, this race is not unprecedented, according to Dr. Harcourt, who says he takes comfort in being able to “turn to history to help understand and interpret our current moment and reassure myself that things have been crazy in the past and things feeling crazy in the moment is not a new sensation for people going through these kinds of elections.”
Dr. Bigelow followed by sharing polls from Nate Silver’s FiveThirtyEight that predict Biden will win by a strong margin, stronger than what the website had predicted for Hillary Clinton in 2016, giving Trump only an 11 in 100 chance; this poll also favors Democrats to win the House and Senate. Dr. Bigelow expresses more faith in these numbers than in the 2016 polls that he says were systematically off in the upper Midwest, particularly in Wisconsin in which the polls were six points off. Polls in the Sunbelt states–Arizona, New Mexico, and Nevada–also underestimated Clinton’s performance.
After the 2016 election, major pollsters such as Pew Research and Gallup concluded that they had undercounted lower educated rural people in the upper Midwest, looking at matters like age, gender, and race when they were considering how accurate their poll was and how it might want to be adjusted. But this year, these and other organizations “have taken the kind of unorthodox step of waiting their polls this time to account for underreporting from folks with lower education and from rural areas in those states,” says Dr. Bigelow. To now include education is a noteworthy change, raising confidence levels that the polls will predict more accurately this year.

Dr. Bigelow also examined the new value of states like Pennsylvania, Georgia, Iowa, and Texas in determining the election. Specifically for Texas, he shared a 70% prediction for the President to win the states, which recognizes both that the fundamentals of Texas are still quite conservative state and the emergence of more possibilities for Democrats. In fact, some polls show Biden leading in the state, begging answers to the question: What is changing about Texas? Dr. Bigelow cites the state’s urbanization–people moving to Texas and growing the cities, thus making the cities a more dominant force in Texas politics–as the chief reason.
Despite an apparently more accurate polling system this election season, Dr. Bigelow wonders how pollsters will consider early voting and especially mail-in voting. “I’m not really enthusiastic about mail votes,” he shares. “It’s something that I understand needs to happen this time because of safety concerns.” His unease rests not so much on voter fraud as it does on whether people vote correctly. “The potential to mess up your ballot is kind of high,” he worries, especially in states that have not previously voted by mail.

So what if the results are disputed, and the country enters a constitutional crisis? As Dr. Harcourt described earlier, this would not be a first for the nation, and such an example is the 1876 disputed presidential election between Republican Rutherford B. Hayes and Democrat Samuel Tilden. That year, unresolved electoral votes in Florida, Louisiana, and South Carolina–Oregon was also challenged–led to each state sending dueling electors to Congress. There, citizens saw Dr. Bigelow’s disaster scenario, as the House and Senate were split between parties and unable to concur on a resolution, which led to the creation of the Electoral Commission in January 1877 that held the purpose of breaking the deadlock.
After the event, students stayed on Zoom to ask questions about whether drive-through voting and other accommodations made during the pandemic have increased voter turnout and if these should be made permanent options for all voting opportunities. Other questions sparked discussions on voter intimidation and how polls account for voter suppression.

The information above was presented the week before Election Day. Biden, who is the current president-elect (as of November 9), did not win by a strong margin as predicted, nor has a blue wave swept the nation. Although not enough to become the majority, Republicans gained at least seven House seats, whereas Democrats lost at least four in a disappointing attempt to expand their majority. Meanwhile, which party controls the Senate will be determined by a Georgia runoff in January. Nonetheless, Dr. Bigelow was right to express concern over court cases where campaigns seek to determine the validity of ballots in battleground states. He was also spot on to suggest that President Trump, should he hold an overnight lead in a state like Pennsylvania on election night, would declare victory in spite of expectations of a blue shift to occur due Democrats showing more sensitivity to Covid-19 and opting for mail-in ballots over in-person voting.
The American people can expect to learn the final outcome of the election in December.