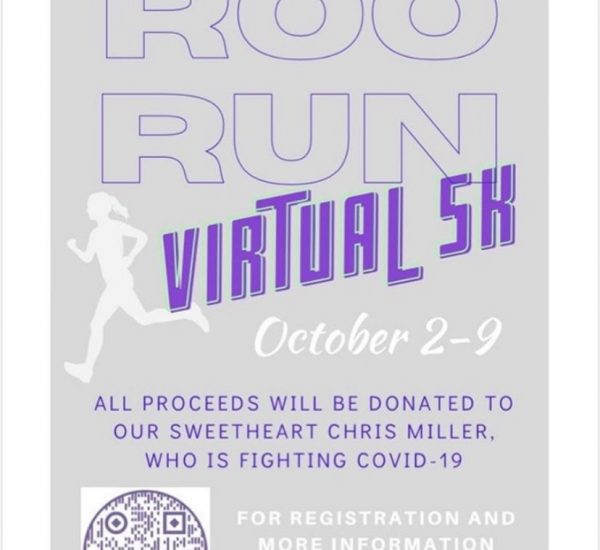 Every year, Kappa Gamma Chi holds its Roo Run, a 5k event benefiting a charity of the sorority’s choice. On a traditional year, participants would come together on the morning of homecoming to run a route in hopes of being one of the first to finish. Registration fees would be donated directly to the chosen organization. This year, because of COVID-19, the Kappas had to find a different way to hold their classic event. Ashley Elliott, president of the sorority, and Abby Ross, a co-chair, spoke about how this year would look. Elliott approached the school to start the process. “We came to the conclusion that we would make it a week-long event where people could sign up and run the 5k on their own time,” Elliott said. “Then submit their personal time and a picture of themselves. Then we would email them a T-Shirt and Thank-You letter.” Elliot says planning came with some concerns about how a classically in-person event could be pulled off virtually. However, through collaboration with the school, solutions were quickly found: “We had our PR chair make a graphic that we could post on social media, and we hung up flyers.” The cause this year hit close to home for the Kappas as well as the rest of the AC community. All of the money from the event is going to our sweetheart, Chris Miller, who has been in the hospital for two months battling COVID. Thankfully, he was able to come home [recently],” Elliott said.
Elliott continued that above all else, the spirit of those involved has been the highlight of the event. “We had so much support throughout Greek Life who sponsored this event, we even had alumni who sponsored this event. Just the overwhelming love that Chris has gotten from Austin College, in general, has been astounding.” She says that the support of the Roo Run was just a look at how unifying AC students’ love for one another can be. “I think a lot of times there is a possibility for tension between Greek groups, but that just flies out of the window when an Austin College student has been affected by anything really.”
The group has also created a Go-Fund-Me for Miller, to go along with Roo Run profits. With 50 participants this year, Kappa Gamma Omega raised $746 toward Miller’s recovery.