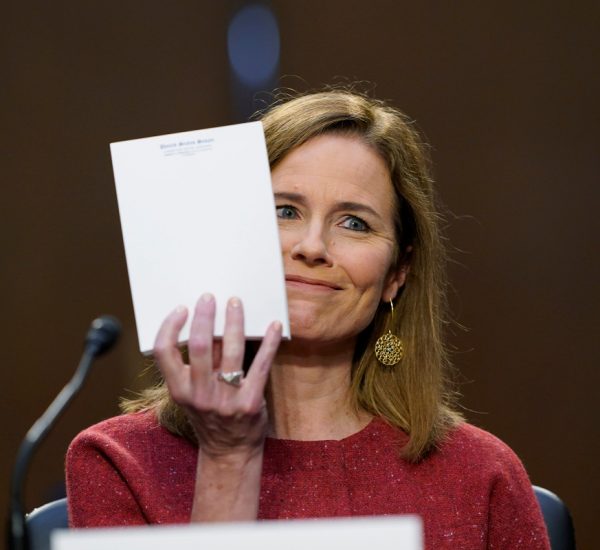 An empty notepad. Type this phrase into Google, and the first result leads to a YouTube video of Amy Coney Barrett holding up a blank notepad during one of her Senate confirmation hearings to fill the vacancy left by the late Supreme Court Justice Ruth Bader Ginsburg.
Republican Senator John Cornyn (TX), prompted the moment following intense questioning by Democratic senators into Barrett’s judicial ideology regarding issues including the landmark cases Roe v. Wade and Obergefell v. Hodges, Obamacare, and potential disputes concerning the 2020 election. Barrett widely impressed Republicans with her knowledge of precedents set by judges, court cases, and legislation that she seemingly pulled from her head. This helped paved the way toward their rushed vote to confirm Barrett 52-48, with Susan Collins (ME) representing the only Republican to join every Democratic senator in voting against Barrett’s confirmation.
During the hearings, Democrats line of questioning emphasized Barrett’s Catholic faith and possibility of  a personal agenda. A common complaint about Supreme Court nominee hearings centers on the nominee’s refusal to comment on past cases and future litigation, much to the dismay of current Democrats who were already protesting the decision to confirm a nominee during an election year. Throughout the confirmation process, they confronted Republicans who filibustered former President Obama’s court nominee in 2016 for the same reason. Both sides have argued that the American people should choose whom they want to fill a vacancy. This year, Republicans argued that voting amid Covid-19 creates a strong prospect that election litigation will go to the Supreme Court, which will demand a definitive answer that a 4-4 court cannot achieve.


Judge Barrett’s confirmation makes her the only judge on the court to have earned her law degree from a school besides Harvard or Yale, having graduated at the top of her class from Notre Dame Law School in Indiana. Additionally, her presence marks the first time a mother of school-aged children, who range from 8 to 19, has sat on the Supreme Court. One of her seven children was born with Down syndrome, and she and her husband, also a lawyer, adopted two of their children from Haiti. Her husband and each of their children sat behind her during the hearings, and a memorable moment from the process involved her describing how her family reacted to George Floyd’s murder:

Given that I have two black children, that was very, very personal for my family. I had to try to explain some of this to them. I mean, my children, to this point in their lives, have had the benefit of growing up in a cocoon where they have not yet experienced hatred or violence. And for Vivian, to understand that there would be a risk to her brother or the son she might have one day of that kind of brutality has been an ongoing conversation. It’s a difficult one for us like it is for Americans all over the country.


Now the fifth woman to serve on the Supreme Court, Justice Amy Coney Barrett will bring a constitutional “originalist” perspective into court cases, another concern voiced by Democratic senators. According to her, “Originalism means that you treat the Constitution as law because it commits these texts to writing, and in interpreting that law, you interpret it in accord with the meaning that people would have understood it to have at the time that it was ratified. And the reason that you do that is because otherwise–as I said, the law stays the same until it’s lawfully changed–judges would be in the Constitutional Convention business of updating the law rather than allowing the people to take control of that.”
The National Constitution Center, a nonprofit institution and America’s leading platform for constitutional education, similarly defines originalism: “Originalists believe that the constitutional text ought to be given the original public meaning that it would have had at the time that it became law.” In other words, originalists do not believe the meaning of the Constitution changes over time and today interpret the Constitution to possess the same meaning as it did when it was written despite any changes in social attitudes, therefore refusing to impose personal meaning.

Justice Barrett is already hearing arguments for Fulton v. City, where a Catholic foster agency is challenging the city of Philadelphia for denying the agency from using its foster program because it will not certify same-sex couples for adoption. With the court set to decide sometime next year, Americans look forward as they watch how the new 6-3 Republican-appointed majority will shape the future of the Court for decades.