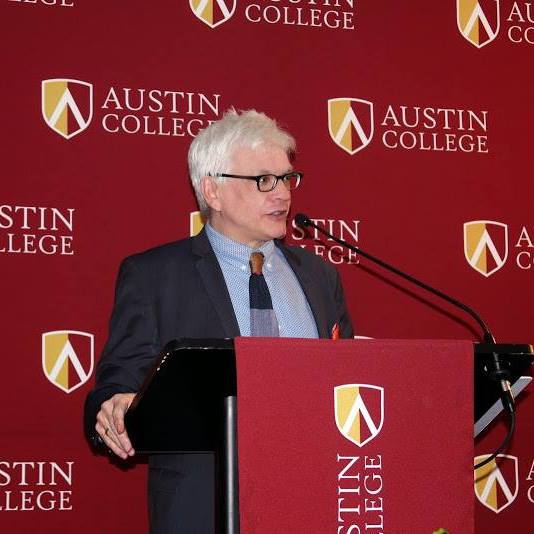 Ever since the ‘RooWrite competition was announced earlier this year, it’s been one a big conversation on campus, especially among creative writing students. After all, how could one not take advantage of such a great writing opportunity? Not only would winning a college-wide contest look great on your resume, there’s also prize money.
1. Do you feel that your time at Austin College impacted your desire to become an author?
The irony is that I did very little writing at AC! I was definitely a theater kid; spent nearly all my time working on plays in Ida Green. Embarrassingly, I even took very few Literature classes — one on Shakespeare, one on Southern writing. I had a huge reading habit in high school, and reading is always a baseline for writing.

But going back to theater for a minute… as much as I loved acting, my core fascination with theater was the plays as a written work:  what they were about, how they were written, what they were saying, why they should be done. So I think those were the building blocks toward the dramaturgy degree I ultimately got in grad school, which ultimately led to my writing career. And even that has been split among many different forms: memoir, fiction, plays, screenplays, and most importantly (for my bank account, at least) a 25 year career in journalism as a writer and producer at ABC News.
2. How did your time at Austin College impact you as a writer in general?
It gave me stories, for better or worse! My first book was a memoir called The History of Swimming, which was directly about my years at AC, and my relationship with my twin brother, who also went there. They — whoever “they” is — always say “write what you know,” and I knew AC inside out. It was the typical autobiographical first work so many writers have to get through, and I told the truth in it. At least my truth. Some people didn’t like it and it led to a few years in the wilderness, in terms of my relationship to AC. But I loved recreating so much of what I loved about AC in the book.


3. Why did you feel inclined to create the short story competition here at Austin College?

In 2014, the beloved and legendary AC English professor Carol Daeley (now happily retired) created a “‘Roos Who Write” program for Homecoming that year. A dozen or so AC grads who had become writers, in a variety of genres, were invited back to give talks, readings, etc. It was incredible!

Somewhere in that process, I literally don’t remember how, a few of us came up with the idea of a writing contest for students as a part of the whole thing. So it would be truly immersive and inclusive, not just a bunch of old people yakking about their books! We put together a pool of money for prizes and had a lot of great submissions, coordinated by the English faculty. Three of the returning writers became the ultimate judges, read all the submissions, and awarded three or four money prizes. We had a public presentation and the students were honored. They were so excited – and I was reminded how thrilling something like that (the honor AND a little cash) would have been when I was a student.

It was so successful, and had such a high degree of student engagement, that we talked about it becoming a yearly event, the next year to focus on poetry, then back to prose, etc. But as so many things do, conceived in the flush of first excitement, it didn’t happen. Just sort of fell through the cracks and got forgotten as everyone went back to the reality of classes.

This fall for homecoming, I was asked to do a Zoom reading and talk about my latest book, a novel called Rules for Being Dead — which in many ways is a prequel to Swimming. While we were mapping that out, I casually mentioned how much fun the story competition had been, and that I’d be willing to fund another one. And now it’s finally happening!

4. Is there anything in particular that you are hoping to achieve through this competition?

I want students to have fun writing stuff. There’s not enough fun in life today. I want to set an example and even model that alumni engagement can go a long way in terms of impacting students – that a little bit of interest, of mentoring, of encouragement go a long way. That there’s life outside of class and that everyone has the potential to enter the professional world as a writer. I was the unlikeliest person to end up there, but I have. And I think it’s also good for students to have some input from people other than their teachers, who we sometimes take for granted sort of like, “Oh, them.”

When I was first talking to Professor Meg Brandl, who’s coordinating and spearheading this on campus, she said what a great thing it was for students to have a writing win to put on their resumes. I hadn’t even thought of that – but flashed back to my early years out of college when I was trying to present a version of myself out to the work world, and where every little bit counted.
5. What sort of stories are you most interested in seeing come from this short story competition?

I hope students will really dig deep and write something meaningful, away from the pressure of having to turn in something for class. There’s such a world of identity and representation now that wasn’t even thought of when I was a student, so I want them to tell me who they are. To celebrate that. I have to confess that I’m not a fan of sci-fi or speculative (although I have a ghost in my new book and think it’s completely natural!) or fantasy, but I have an open mind. It’s as long as they can make that imaginary world real and convincing to the reader.
6. What makes a good story in your opinion?

Something that grabs me, or has “blood on the page.” I came across that phrase years ago and it has never let me down; it means it’s got blood and a pulse and life. It’s something only that particular writer could have done; it’s not generic or imitative or cookie-cutter.
I love a good story arc: beginning, middle, end, but sometimes that’s a little hard to cram into a short story. In place of that, give me mood and atmosphere. Let me know where I am and what it feels like. In novels, I love great writing, but I have to admit I lean a little bit more towards the story itself. What happens. Given the length constraints of a short story, I’m much more inclined to look at language and a sense of self that comes through the writing. Give me a surprise. Give me something that I can’t stop thinking about.

“Give me something that I can’t stop thinking about.”

7. Are there any tips you have for those entering the competition, or for young, collegiate writers in general?

Read and write! The basics! As I said earlier, a prerequisite for writing (in my opinion) is reading. Nearly all the writers I know began as childhood readers. That’s how you discover new worlds. That’s how you see what’s out there, and find favorites. Jump around and try to go outside your comfort zone.

And then — write. A mentor of mine once said to me, “A writer writes. So just do it.” This was in the first few years after college when I talked endlessly about wanting to write, but hadn’t really done it. You just have to start. And I think if you can get in a habit of daily writing you’ll be that much ahead. It’s like working out; a daily habit builds muscle. I didn’t do that and it’s advice I wish I could go back and follow. Strangely, it was my ten years working as a writer at Good Morning America that really got me going. Every day I’d have to pump out a six or seven page “briefing note” that would go to the anchors, explaining what the segment would be. That got me in a daily writing habit, even though it wasn’t “creative writing” per se.

And the other thing is to just get a draft down. Maybe that’s more applicable to longer works, but it’s also something a valuable mentor told me. Just get something down on paper. “Bad words are better than no words.” Then the real work — which is endless editing — can really start. (And again, that’s subject a bit more to the style of the writer. Are you a stylist — or a storyteller? Ideally, the two meld together.)
8. Do you think that you would be interested in hosting more opportunities like this at Austin College at a future date?

Definitely! We’ll see how this one goes. But more so, I’d like it to lead to other alumni to step up and sponsor outside activities in their arenas. It doesn’t have to be about writing. Sponsor a contest to make some invention! Write a policy paper that could create change. Put some money behind it. I’ve always tried to follow the idea of “Pay It Forward” and this is an example of that in action.


9. Where can Austin College students find more information on you and your books?
I’ve got a great website called kimpowersbooks.com that has stuff about all my writing on it – dig in!
So that was my exclusive interview with writer and ‘RooWrite sponsor / judge Kim Powers! I hope that this interview gave you insight into both the man behind this competition as well as ideas on how to enter the competition for yourself. Happy writing, Roos!
To find out more information about the ‘RooWrite competition, click here.
To find out more about interviewee Kim Powers, visit his site here.