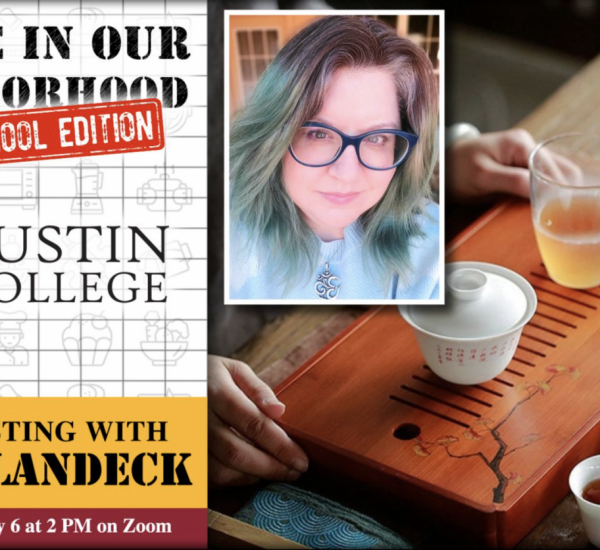 You may have heard of a new online program on campus called “People In Our Neighborhood.” Every month Austin College showcases someone different from the AC community who has some sort of talent to share. This is a great opportunity to virtually connect with other students, faculty, and staff, and learn new skills.
This Zoom series originated at the end of Fall Term with Dr. Erin Copple Smith. Because last fall was the first full semester where students were given the option to study on campus or remotely, Dr. Smith saw that many remote students weren’t able to engage with the Austin College community like they used to. She wanted to figure out some way to get virtual students involved so that they could feel more connected. So, she worked together with several student leaders who were part of the JanTerm Orientation coordinators, to come up with a Zoom series.
Dr. Smith wanted to engage students in a creative and entertaining way over Zoom so that everyone could see each other face to face. The idea came to her one night when she was thinking about the project: “I was thinking about what kinds of things I don’t mind doing on screens and realized how much I like to watch cooking shows. I thought, “ ‘What if we invited students on to Zoom for a cooking show?”  The idea grew from there.’ ”


I was fortunate enough to attend one of the project development meetings at the end of December through my job with the Marketing and Communications division. The basic idea was just to do a cooking show with Cece O’Day as the host. However, during the meeting we further developed the project to include other faculty, staff, students, and even alumni who have a special skill to share.
Three episodes have already aired and two of them can be seen here. Cece O’Day debuted the series with a cooking demonstration for no bake apple crisp and haystack cookies. She says she chose these recipes because “they are easy and can be made with ordinary ingredients. They are also particular favorites of our son Ryan.” In addition to engaging remote students, Dr. Smith also wanted to choose activities that can be easily made by many students, which is why Cece’s choice of recipes fit perfectly with the project.


From the perspective of the presenter, Cece said she thoroughly enjoyed the experience. One of her passions is not only cooking and baking, but also watching cooking and baking shows. So, she loved the idea of having her own show as well as supporting a new AC program that builds connections throughout our community. “I also love Mr. Rogers so how could I say no to People in Our Neighborhood?”

Student DeRay Darthard and Dr. Mindy Landeck have also presented in this series. DeRay showed his audience how to make his famous chili mac, while Dr. Landeck demonstrated how to taste and savor three different East Asian teas. Dr. Landeck has a great passion for tea and has even taught a class on tea and Japanese tea ceremony. In her episode, the audience tasted a green tea from Japan, an oolong tea from Taiwan, and a black tea from coastal south China.
Like Cece, one of the main reasons Dr. Landeck participated in this series is because she is “a big believer in student outreach, especially when it can include some kind of a direct experience with or exposure to other cultures.” Her favorite part of this experience was hearing everyone’s reactions to the different teas. Having taken a tea course from Dr. Landeck, I can attest that many flavors notes can come through in a tea than would be expected.

The latest episode was on Saturday, March 6 and Dr. Lisha Daniels Storey, the Director of the Scarbrough Center for Writing, will taught us how to journal. Be sure to look out for more episodes of “People In Our Neighborhood” in the coming weeks!