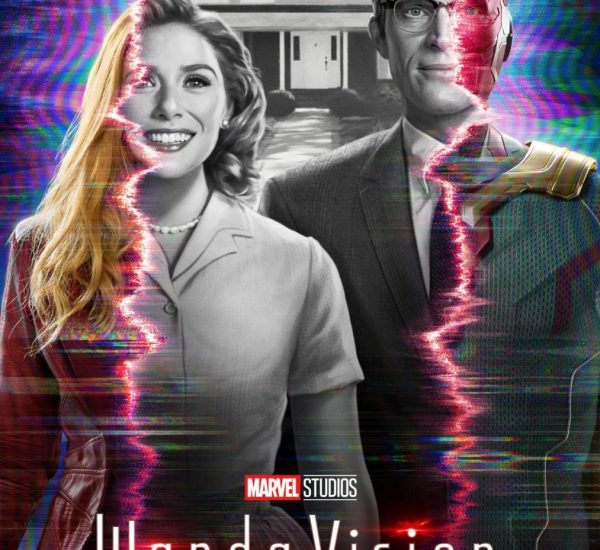 Marvel Studios’ latest TV series, WandaVision, created by Jac Schaeffer, began airing in January 2021 and has since taken fans of the Marvel Cinematic Universe on an unpredictable rollercoaster ride.
The story of WandaVision follows the misadventures of Wanda Maximoff and her husband The Vision set in a fantastical world of a yesteryear television program, evolving through each decade every episode, from the 1950s up to the present day. There are a total of 9 episodes and the final was released Friday, March 5th. The episodic format pays homage to previous eras of American sitcoms, making for a constantly entertaining and intriguing experience. Though the plot is confusing at the beginning, the suspenseful nature of the plot keeps the audience on edge, awaiting the next episode.
The story takes place in a suburban town called Westview, New Jersey just outside the real world. There are small communities within the town in which all the residents of Westview are bounded by Wanda’s powers within the reality created by her. It centers around the family-oriented lifestyle of Wanda and Vision.
There are also moments in the show that explore the idea of grief and other painful emotions that humans experience. However, acknowledging the feeling and struggle allows people to overcome the pain. This is what makes us truly powerful. Dealing with pain and emotions is a recurring theme throughout the series and constantly hints at a resolve at some point.
The best part of watching this series is that it’s not only entertaining to Marvel fans. Filled with references to previous movies and adventures in the Marvel Cinematic Universe, WandaVision captures the imagination of both casual viewers as well as die-hard Marvel fans as it carries on the stories of our favorite superheroes after the events of Avengers: Endgame.
It’s no surprise that Elizabeth Olsen as Wanda and Paul Bettany as The Vision have played their roles exceptionally well with their on-screen chemistry coming to life. The series explores the origin of Wanda’s powers, which up until now has been hidden. The Vision, on the other hand, is similar to the comic book character as well as a new version created by Wanda within the realm she created. You’ll just have to watch to find out the meaning behind Wanda’s telepathic and magical powers!
Now streaming on Disney Plus