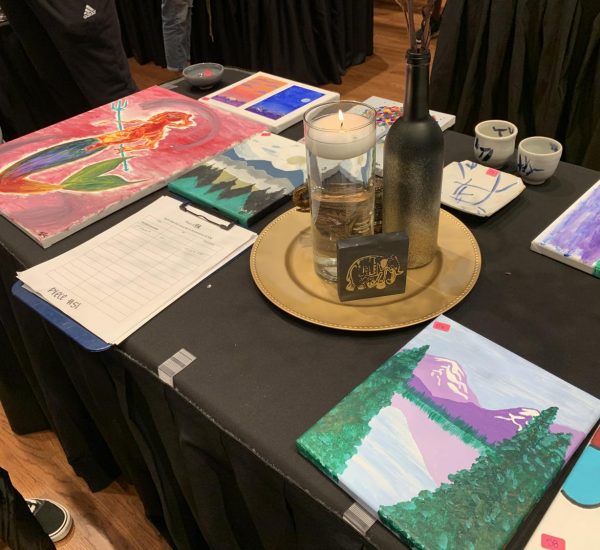 Tostan is a non-governmental organization, working in Africa, with the mission to empower “communities to develop and achieve their vision for the future and inspire large-scale movements leading to dignity for all.” Tostan means ‘breakthrough’ in the Wolof language and this year the event focused on raising awareness for women’s education in Africa.
Austin College supports Tostan by hosting an annual art auction. Students donate their hand-made art, including paintings, drawings, ceramics, pottery, and photography, to be sold in a silent auction. On the day of the event, students have the change to bid on any piece of art that they like, learn about Tostan, and enjoy dinner. All of the money made from student bids is donated to Tostan.

Austin College hosted this year’s Tostan art auction on March 24 in the newly renovated Sallie Majors Chapel. The event, hosted by Student Assembly and the art club SOMA, was a huge success with more than 60 students in attendance.
Dr. Mathias Akuoko, Assistant Professor of Public Health, spoke about the importance of education. He discussed that many communities in Africa only send boys to school and keep the girls at home to learn housework and help with agriculture. Akuoko asserted that educated women act as great role models for children and are more likely to spread their knowledge. One of his most impactful lines was towards the end of his speech. He said, “When you educate a man you educate one person, but when you educate a woman, you educate an entire community.”

This was such a powerful speech which showed the importance of Tostan’s efforts. It encouraged students to make their final bids on the student-made art to support Tostan’s cause.
After Akuoko’s speech, several members of Student Assembly explained a bit more about Tostan’s areas of impact. Earlier in the evening, when each student arrived, they were given a colored string. Each string represented one of Tostan’s areas of impact: education, health, environment, governance, and economic empowerment. They also discussed female genital cutting, a serious issue in some parts of Africa.
After each area of impact was described, students would tie their string to a hanging tassel decoration, which they would donate after the event.
As the night was coming to an end there was some fierce competition for several art items. There were bidding wars for a pair of toadstool bookends, a couple ceramic mugs, and several pour art paintings.

Most students who bid on art were able to leave with at least one beautiful piece. The top bidder this year was Vincent Ton, who left with more than 15 pieces.
The event was highly anticipated, as it had been two years since the last Tostan event. At the end of the night Tostan turned out to be a huge success and left everyone excited for next year’s fundraiser.