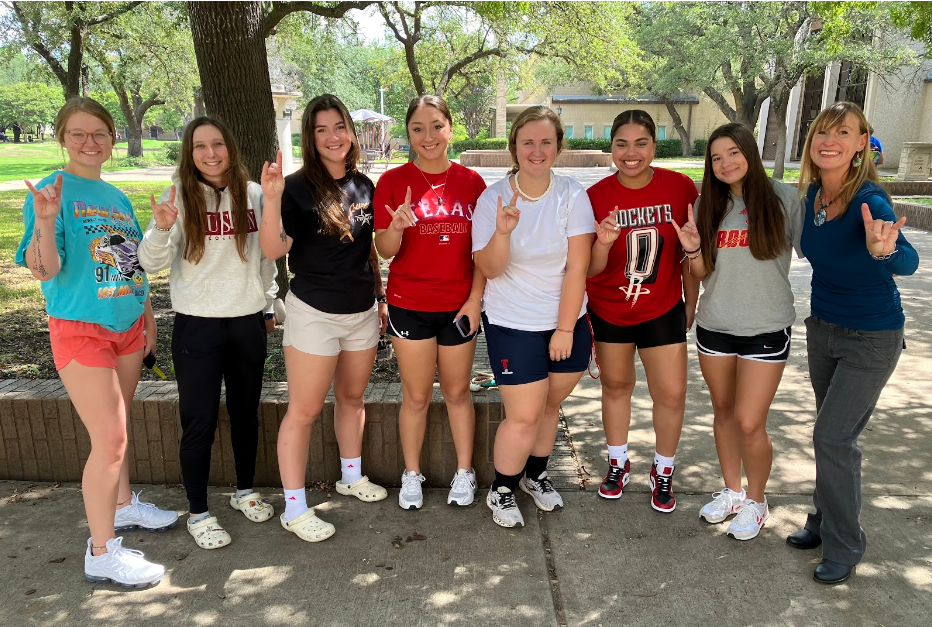 Freshmen Kaitlyn Barrett, Lupita Reel, Brooklyn Cook, Faith Butler, and Tessa Contreras are new to the college environment. Nia Carter and Keiten Day are transfers who are continuing their academic endeavors at Austin College. What do they all have in common?

“We’re incredibly excited about our incoming ’Roos,” said Head Softball Coach Kelly Sylvester about the five freshmen and two transfers the Austin College softball team is adding to their program. “They bring so much to our team and campus that it’s difficult to talk about them purely in terms of softball; but I’ll try my best to do so. On the field, they have the potential to make an immediate impact on our program”

“I chose AC because it gave me the most variety of classes in order to pursue something I am passionate about and its partnership with medical schools,” said Kaitlyn Barrett, adding that “getting to play softball is a major bonus!”

“KB is a force and a great student of the game – she has an insatiable thirst to keep expanding her softball IQ,” Coach Sylvester commented. “We’re excited to have her bat added to our lineup and her fiery instincts behind the dish or in the hot corner.”

Nia Carter, who transferred from North Texas Community College, said “I came to expand my knowledge and achieve my educational goals.” Nia is a double major in English and Political Science. “The Pre-Law Society, Black Expressions, and Student Assembly were compelling reasons to attend this institution,” she added.

“I also wanted to continue my softball career at a four-year after my time playing at North Central Texas College. The culture and environment on the softball team is something that you can’t find everywhere.”

Nia was Offensive Player of the Year for district her senior year, was one of Dallas-Fort Worth’s top hitters and had one of the highest number of home runs in a season according to the Fort Worth Star-Telegram. She was also awarded First Academic All District and Honorable Mention her sophomore year. At NCTC, she was First Team Academic All Conference two times. She is from Wylie, Texas and graduated from Wylie East High School.

Coach Sylvester said that Nia “is a hitter and an absolute joy to watch as a corner player, who also will be a power pitcher in the circle on occasion.”

“I decided to attend Austin College because of the inclusivity of AC, as well as the uplifting nature of this college. The softball girls have been beyond accepting and have shown me that there is always someone in my corner,” said Lupita (also known as Pita) who intends to major in Political Science while minoring in History.

“Pita is phenomenally versatile and impressive. Not only is she a solid catcher, she has the range, hands and savvy of a true shortstop, and at the plate, she’s got both speed and power as her weapons,” said Coach Sylvester.

Brooklynn Cook from Athens, Texas said she “chose AC for softball because of the culture and the motto.” She was District Co-MVP twice in high school.

“Brooklynn commands the ball in the circle and, like many of our pitchers, she hits well and will be competing for a secondary position,” Coach Sylvester remarked.

Brooklyn graduated with both a high school diploma and an associate degree from Athens High School. At Austin College, she is a double major in biology and chemistry. “I chose AC for academics because it was a good fit for what I want to do,” said Brooklyn.

Faith Butler also thinks AC is a good fit: “Out of all the schools I had offers from, AC had the best academics and was the best financially. Softball didn’t have a weigh in with my choices. I plan to major in kinesiology,” freshmen Faith Butler said.

Faith was First Team Outfield & Infield, Academic All State, and sixth in her class at Krum High School in Krum, Texas.

Coach Sylvester said that “Faith brings more speed and range in our outfield” and also that “she’s a smart hitter and a heads up baserunner.”

Keiten Day transferred from Collin College in McKinney, Texas. “My first visit as a transfer was very welcoming because everyone was so nice and made me feel at home, and having been here even for the short period of time I have, I feel I can call AC my new home away from home.”

“I chose AC because I spent four years watching my cousin Noah Jesko play football at AC and heard how passionate he was for the college and the environment. Coach Sylvester made me feel very welcomed as well when she invited me to play softball at AC. My goal this year is to pursue my love for softball but also continue to further my education and make many more friends!” Keiten said.

Keiten was All District Freshmen Catcher, Volleyball MVP, and an American Sign Language Honor from Lumberton, TX, Lumberton High School. She is majoring in Psychology and Pre-Med.

“Tessa is solid anywhere in the infield. With her strong bat and great instincts, we expect she’ll be competing in multiple spots on the field,” Coach Sylvester affirmed.

When commenting about the Austin College softball program, Coach Sylvester stated “Our program underwent a deep rebuilding process – significantly continuing to raise our standards and culture. Each year, the bar gets set higher for prospective recruits. Given Austin College’s high-academic standards and exceptional reputation in what I call our niche programs, I strive to recruit young softball student-athletes with career aspirations in tough, competitive fields, who are excited to lean into the challenge of being stretched both academically and athletically.”

Adding the new members to the roster is something she is incredibly excited about.

“These young women not only stood out during the recruiting process, they continue to impress us more each passing day – they’re great people, students, teammates, competitors and we’re absolutely thrilled they’ve joined us!”