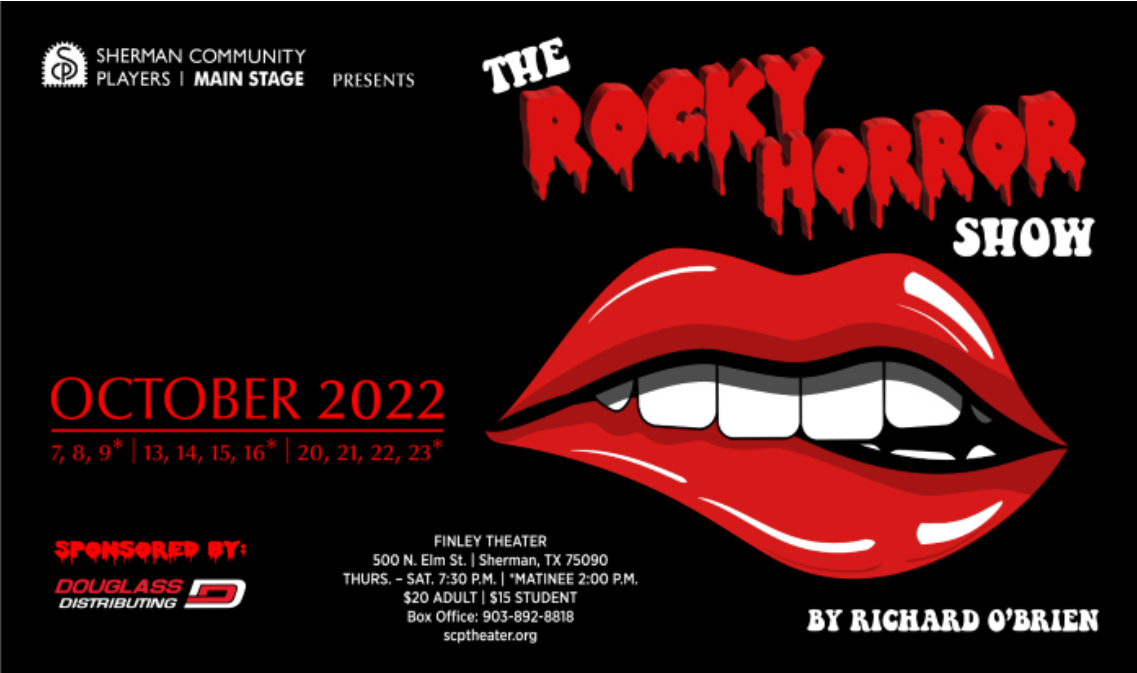 On Thursday, Oct. 6 I went to the friends and family night for Sherman Community Players’ Rocky Horror Show. I thoroughly enjoyed the show, and I will be coming back in costume for some Halloween fun later this month.

While I am certainly no theater expert, I am a Rocky Horror fan, and for me, this production hit the nail on the head. It was campy and fun, with many great performances throughout. The show is well-cast, well-costumed, and beautifully scored by a live band.

Aaron Jobe, who plays Frank in the show, brings all of the confidence and attitude required for his leading role and then some. Fans of the movie will not be disappointed, as Jobe clearly takes strong inspiration from Tim Curry’s performance in the same role.

In addition to a talented lead, there were several other standout performances in the show, including Carissa Hodges who plays the Usherette and Magenta. She starts the show off strong with an excellent rendition of “Science Fiction Double Feature.” While Hodges starts off the show on a high note, the rest of the performance does not disappoint. Timothy Austin Jr. who plays Brad Majors and Kate Burke who plays Janet Weiss have fantastic on-stage chemistry, as evidenced by their hilarious physical comedy during “Dammit Janet.” In addition to her acting skills, Burke is also a very strong singer, as is evidenced in her performance of “Toucha, Toucha Touch Me.” Lilly Boessen, who plays Columbia, is also an exceptional singer and shows off her tap-dancing skills during the show. Jaden Petty brings excellent movement and physicality to his role as Riff Raff. Finally, Eric Vest, who plays Eddie and Dr. Scott is a wonderful comedic actor who adds a ton of giggles to the show. The ensemble also includes many talented singers who back up the characters beautifully.

This was my first time seeing a production of The Rocky Horror Show, though I have seen many showings of the 1975 movie The Rocky Horror Picture Show and shadow casts of the same. The Sherman Community Players’ The Rocky Horror Show is quite similar to the movie version, though there were several key differences. Certain scenes from the movie are absent from the stage show, and vice versa. Additionally, slightly different plot devices are used to get characters from point A to point B in a stage show format. The most jarring (though not unpleasant) change for me from the movie to the stage show is that Brad has his own song, called “Once in a While” that is not included in the movie.

You can see The Rocky Horror Show at the Finley Theater at 500 N. Elm Street in Sherman. Showtimes are 7:30 p.m. Thursday through Sunday through Oct. 23. There will be a special midnight show beginning at 11:45 p.m. on Friday, Oct. 21. Tickets are $20 for adults and $15 for students, and $10 for Austin College students When I attended the show the runtime was about 2 hours, including a 10-minute intermission. Sherman Community Players encourages audience members to buy one of the $5 prop bags available for purchase in the lobby instead of bringing their own props. All of the props that are suitable for use in the theater will be included. Sherman Community Players encourages audience members to participate by shouting callbacks at the cast, but will not be providing a script of callbacks. If you are not yet a diehard fan, I would recommend looking callbacks up online and remembering a few of your favorites, or just learning the classic ones from the rest of the audience. Audience members are also encouraged to dress up for the show. Typically, people either dress up as characters from the Rocky Horror Show or just add fishnets and heels to their outfits. If you don’t feel like dressing up, you are welcome to come as you are.