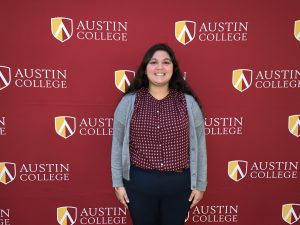 On Friday, November 15th the results of the Student Assembly Elections were announced and Nicole DeLuna is our new President! Our new Vice President is  Brigid Fox and there are several new representatives for each class as well. They were sworn into office on Tuesday, December 3rd. Before her inauguration, I got the chance to sit down with our new President, Nicole Deluna, to talk about her plans for her upcoming term.

Nicole is a sophomore from San Antonio who plans on double majoring in Economics and Anthropology. She decided to run for president because she wanted to be more involved in Student Assembly and to help represent the school. She also hopes to grow as a person and help grow Student Assembly. Before running for president Nicole had experience in student government when she was in high school and last year she was apart of the Student Sustainability Fund. On this team, she worked with others to plan more outdoor study spaces. Nicole hopes to continue with these plans during her term as president. Environmental awareness is one of her passions. Outside Student Assembly, Nicole is apart of Think and is a tour guide.

As president, she also hopes to pass several safety resolutions.  One of her biggest plans is to increase lighting around campus. She especially wants to focus on the area around the Jordan Family Language house. Additionally, she wants to increase the number of blue emergency light posts around campus. In a commitment to safety, Nicole plans on continuing the previous administration’s plan to install safety cameras around campus. When asked what she is most excited about, Nicole said that she can’t wait to see what the other representatives in SA come up with. If you see Nicole or any of the other new Student Assembly members don’t forget to congratulate them!